IM GORGEOUS US POCKET COMB US

Aged Open winner at The Meadowlands in World Record

SOMEBEACHSOMEWHERE MY LITTLE DRAGON US 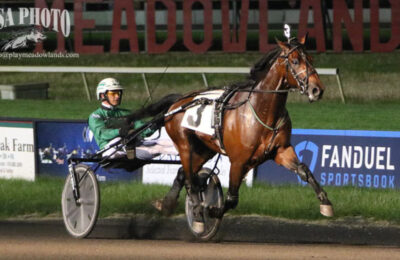 The Muscle Hill horse Muscle M Up, the fastest trotter ever to stand stud in this country, will stand his first season at Goulburn Valley Equine Hospital, Shepparton this year. Fresh semen for the brilliant, young stallion will be available to breeders in both Australia and New Zealand.

The deal was clinched by prominent Brisbane breeder-owner Anthony Perkins, of Trump Bloodstock, with the stallion’s Swedish owners Knutsson Trotting AB, who have shuttled Centurion ATM and Sebastian K ‘down under’ in the past few years.

Muscle M Up, who had a record of 1:51.4, was a smart racehorse in his own right. From 41 starts he won 12 and was nine times placed for $US195,233 in stakes. He was not extensively raced as a juvenile, winning two of his three starts including a division of the Pennsylvania Sires Stake, while at three he took a record of 1:54.8.

Muscle M Up showed that he was up to the best horses of his time, winning in free-for-all company as a four-year-old when he took his mark of 1:51.4 in a $50,000 leg of the Graduate Series at The Meadowlands with the final quarter in a stunning 26.2.

After finishing second in another leg, he was race-timed in a sensational 1:50 racing against Atlanta, Manchego, Six Pack and co in the world record-breaking $250,000 Graduate Final.

Champion trainer Ake Svanstedt, who trained Muscle M Up, said: “He was a real racehorse. He had a very good heart.”

Muscle M Up, an imposing individual standing 16 hands, is one of the most stylishly bred horses at the stud in Australia.

A champion trotter himself, with a record of 1:50.2, Muscle Hill was a world champion three-year-old; he won 20 of his 21 starts and he ran up a record tally of $2.45 million in a single year.

Muscle Hill has matched his greatness as a racehorse in the siring field, and now his sons are achieving distinctions of the same order.

Fashion Athena, dam of Muscle M Up and Millie’s Possession, was out of a successful broodmare in Athena Hanover (1:57.6), by the Hambletonian winner Tagliablue (1:53.6) from Atavistic Hanover, by Pine Chip, sire of the Inter Dominion champion Sumthingaboutmaori.

He is certain to add interest to the Victorian trotting scene.

MUSCLES YANKEE SO SO CHIC US

At 2, winner of Metro Pace Consolation. At 3, winner of Hoosier Cup, NJSS division at the Meadowlands